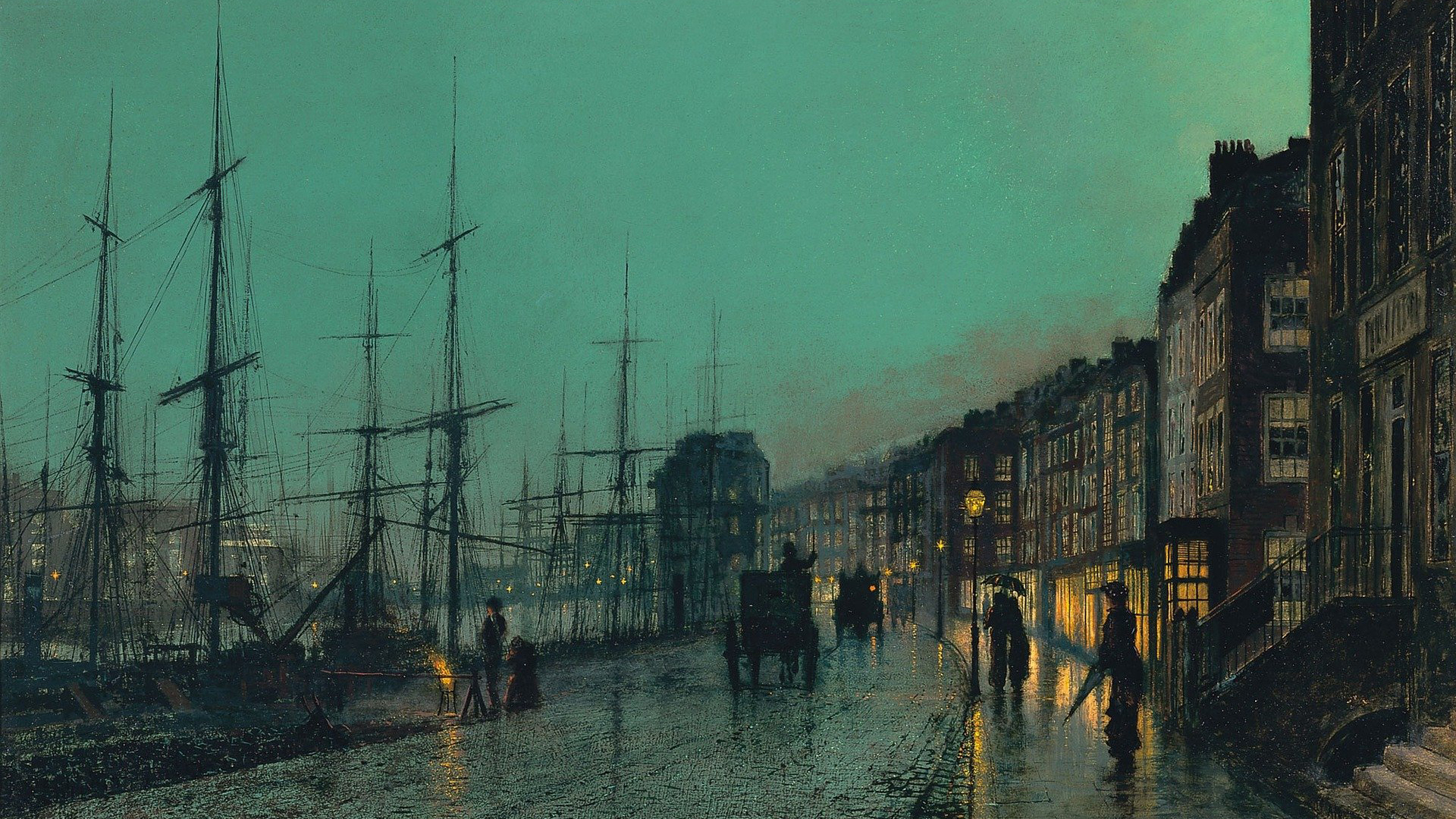 Today, I’m looking at the last three verses of a song called The Rocky Road to Dublin. I made a podcast yesterday about the first two verses and the chorus but stopped because there is a lot of vocabulary to talk about in this song and the podcast would have been way too long.

In Dublin next arrived, I thought it such a pity

To be soon deprived a view of that fine city

The verb deprived means to not have something that you expect to have. It’s almost always used in the passive voice to say that someone or some people didn’t have what they should have had. He was deprived of love as a young child or when the sports club closed, the community was deprived of a popular attraction.

Well then I took a stroll, all among the quality

Bundle it was stole, all in a neat locality

A stroll is a walk for pleasure. You can take a stroll or go for a stroll. I love strolling around places whenever I get to visit somewhere new.

As our hero was out for a stroll, his bundle was stolen. A bundle is usually a pile of clothes all wrapped up together. I think you can have a bundle of other things, it’s just an assortment of things all wrapped up together. There’s a website called humble bundle that puts software and books into bundles that you can buy at once. In the song, though, it was our hero’s clothes and belongings that were tied up and carried over his shoulder on his stick.

He gives some more details:

Something crossed me mind, when I looked behind

No bundle could I find upon me stick a wobblin’

Enquiring for the rogue, said me Connaught brogue

Wasn’t much in vogue on the rocky road to Dublin

If something crosses your mind, it occurs to you, it enters your thoughts. We use it to signpost that we have just thought of something, usually a problem. It just crossed my mind, we haven’t got enough milk to make pancakes, for example.

If you use the word rogue to describe a person, it means a bad person. A rogue is a criminal or outlaw of some kind. It can also be used to say that something is very different, but in the song, our hero is asking after the person who stole his clothes.

Another chorus and we’re into the fourth verse.

From there I got away, me spirits never failing

Landed on the quay, just as the ship was sailing

I’ve spoken about spirits in part 1, meaning the general state of your mood and emotions. He landed on the quay. This is the place that boats can moor or tie up and stop. I think it’s pretty much the same as dock. Apparently, a quay is when a riverbank or the coast is built up so that ships can land, but I used to live on Salford Quays which are a series of man-made basins or deep tanks that ships could sail into to stop and load and unload their cargo. Loads of English people don’t know how to pronounce the word quay because it looks like it should be pronounced quay / kway, but it’s just quay / key.

The Captain at me roared, said that no room had he

When I jumped aboard, a cabin found for Paddy

A cabin is a room on a boat. I have only been on one long boat journey and I had to share a cabin. You can also find cabins on some overnight trains. If you are ever in Egypt, you can get a train from Cairo to Luxor that has cabins you can stay in.

Down among the pigs, played some funny rigs

Danced some hearty jigs, the water round me bubbling

I had to search to find the meaning of played some funny rigs. Some people suggest that a rig is a practical joke or a prank, but others say it’s the word for a song played on a guitar or violin. I think that this is more likely, but either way, it’s not common language these days.

So he played some songs and danced some hearty jigs. I mentioned that Hunt the Hare was a type of Irish dance called a jig. I am not really sure what makes a jig different from another type of dance. To get a better idea, I think you really need to search for a video of some people dancing Irish jigs on youtube.

Hearty, in this case, means boisterous and energetic, that is, with lots of energy. You can also use the adjective hearty to describe a large and filling meal. If you visit the UK, you may get the chance to have an English or Scottish or Welsh breakfast. These are quite similar, though there are different items in each. Whichever variety you have, it will certainly be hearty. Bacon, eggs, beans, sausages, black pudding, mushrooms, tomatoes and toast will probably be on offer.

When off Holyhead wished meself was dead

Or better far instead

On the rocky road to Dublin

So our poor hero is feeling sad that he is on his way to England. Holyhead is a port town on the coast of a Wales. It’s one of the main ports for traffic from Ireland to the UK. Our hero wishes he was back on the road to Dublin. After another chorus, we get to the final verse.

The boys of Liverpool, when we safely landed

Called meself a fool, I could no longer stand it

This, I’m afraid, is not a good advert for Liverpool. When our hero gets off the boat in Liverpool, the boys, that is, the young men he met, called him a fool. A fool is a person who is not clever and unwise. They do things that are foolish. This is not quite as strong as stupid, but it’s similar in meaning. Our hero did not like this:

Blood began to boil, temper I was losing

We still use the expression, it makes my blood boil to say that something makes you really angry. The next phrase means the same thing. Temper I was losing – the syntax is back to front for the sake of the rhyme, but the collocation to lose your temper is common today. When I saw what they had done, I lost my temper – I became very angry.

Poor old Erin’s Isle; Erin comes from the Irish word for Ireland. Erin’s Isle is another way of saying Ireland. They began abusing. To abuse something means to treat or use something badly. I think it’s most commonly used to talk about violent acts against family or children. You hear the phrases domestic abuse and child abuse. Well, the young men that our hero met when he landed at Liverpool were saying unkind things about Ireland and I’m afraid our hero lost his temper.

“Hurrah me soul!” says I, me shillelagh I let fly

I spoke about his shillelagh earlier. It’s a kind of walking stick or club made from blackthorn with a hard heavy knot at one end. In defence of Erin’s Isle, our hero started fighting the boys of Liverpool with his club.

With a loud “Hurray!” joined in the affray

We quickly cleared the way for the rocky road to Dublin

Galway is in the west of Ireland, not far from Tuem.

Nigh is an old fashioned way to say near.

They cheered and joined in the affray. Now, an affray is a small battle. Affray is a crime in English law. It means to act in a way that would make a normal person afraid for their safety. It’s basically the same crime as rioting, but for fewer than 12 people. So now, our hero and some of his compatriots are fighting with the Liverpool boys and clearing them out of the way as they head back to Dublin.

This is an interesting song, but I’d be a little uncomfortable singing it. You see, in the past there was a stereotype of Irish people, that they were violent drunks with an eye for the ladies. In America, there’s an expression ‘paddy wagon’ which is a police van that would drive around collecting up drunk and violent Irish people. Stereotypes such as these are not very kind and I think have been for the most part rejected so if I were to grab my guitar and attempt to play this rig, I might offend some Irish people. However, this song is very popular in Ireland and is often played by Irish people. This is one of those cases where it’s OK for Irish people, but because of the historical prejudice, it’s probably not OK for English or Americans. I’m not sure. I’ll have to ask some Irish people how they feel about it.

Thanks Marco for requesting this song. I hope you enjoy the song all the more now you understand the lyrics. I know you asked about the High Kings version of the song, but I have found a version by a group called the Kings of Connaught that I think is easier to follow so I have embedded it on the page for this podcast on LearnEnglishVocabulary.co.uk.

I hope you have enjoyed this podcast. I do love reading your comments so please leave me a comment on the site or a rating or a review on Apple podcasts. I love to hear from you and any comments or suggestions you have. Thank you also to those of you that have bought me a coffee. I really appreciate it.