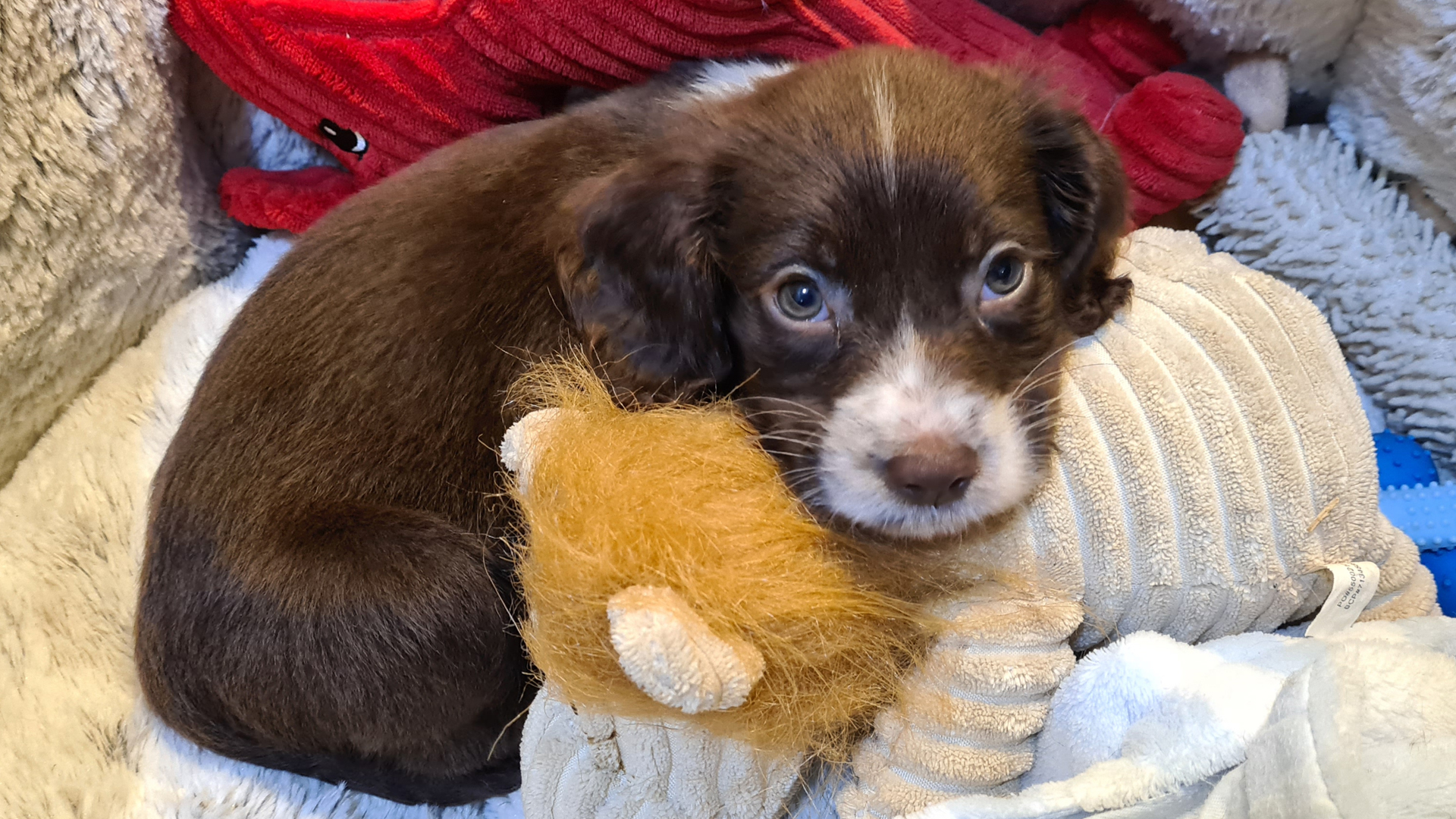 The most popular pets in the UK

Today, I want to talk about pets. The language in this podcast will be suitable for C1 Advanced learners.

Pets are strange. I have recently got a new puppy so I’ve been spending a lot of time cleaning and caring for the dog. She’s going to be a good family pet, but my boys are a bit young and a bit too excited to really help look after her. Anyway, I thought I could tell you a bit about pets and pet culture in the UK. You see, here in the UK, people are mad about pets. There are millions of dogs and cats in the UK. When you go to the supermarket, there’s usually an entire aisle dedicated to dog and cat food and pet care accessories. It was a bit of a shock to my wife, who is not from the UK, for her to see so much dog food and cat food.

So starting at number 10, the tenth most popular pet in the UK is a chicken. The word on the list is domestic fowl.

Domestic is an adjective that means related to or belonging to the house or home. So you sometimes hear about domestic workers. These are cleaners and cooks and maids that work in people’s homes. You don’t hear the phrase much in the UK as very few people have domestic workers. Another common use means related to the home country. You only really come across this in airports where you might have domestic flights and international flights. Domestic flights are flights within the country.

Fowl is a noun and it means a bird that is normally raised for eggs or for meat. So a domestic fowl is a chicken or quail or possibly a duck that you keep in your home for their eggs, normally.

I think that this is quite common around the world.

Let’s move on to number nine.

The ninth most popular pet is a lizard. This might sound strange to people who live in countries where lizards come into your house all the time, but loads of people in the UK keep lizards as exotic pets.

Exotic means unusual and exciting because it seems to come from a tropical country or a country that’s a long way off. You get exotic pet shops that specialise in reptiles and big spiders.

The most popular lizard pets are bearded dragons and leopard geckos.  My son really wanted a lizard for his birthday, but I’m afraid I had to deny him because pet lizards eat live crickets. You can buy them in the pet shop in little plastic tubs. The problem is, when you try to get one or two out for your lizard, the rest can all hop out and escape into your house. If you have a pet lizard, you also end up with lots of pet crickets.

Number eight. The eighth most popular pet is a snake. I like snakes. When I took my son to a local zoo for his birthday, we got to handle a boa constrictor that was really lovely. You have to handle snakes every day or they can get scared and don’t like to be held.

Handle is an interesting verb. It means to pick something up and hold it in your hands, but it can also mean to cope with a tricky situation or person. If you are presented with a challenge at work, you might tell your manager; it’s OK, I can handle it if you are confident that you can cope or succeed despite the challenge. If you buy something that’s made of glass or is fragile, it might come in a box with the words handle with care written on the side. For snakes, you have to pick them up every day to make sure they are used to being handled. When I was at school, my friend had a couple of snakes. There was a little corn snake that seemed to like being handled and a royal python that really didn’t like being handled.

Number seven. The seventh most popular pet in the UK is a tortoise or turtle. I think that the word turtle can be used for all reptile with shells on their front and back, but in the UK, we normally talk about tortoises that live on land, turtles that live in the sea and terrapins that live in rivers.

Actually, I’m not sure about the scientific classification, but for a while, terrapins were popular pets. After the Teenage Mutant Ninja Turtle film was released in the early 90s, lots of people bought them and tried keeping them as pets, but they live about 30 years and can get quite big. Lots of people who bought them ended up dumping them in local ponds and now on Hampstead Heath in London, they have formed a colony and are eating all the fish.

Number 6 on the list of popular pets in the UK is a hamster. A hamster is a cute little rodent that is famous for stuffing food into its cheek pouches. When a hamster finds some food, instead of just eating it, it sometimes likes to keep it in special pockets in its cheeks. I looked after a friend’s hamster when I was young and I was not impressed. You see, hamsters are nocturnal which means they are active at night. My friend’s hamster just slept all day. When I wanted to handle it, it was just curled up in a ball in its little house. However, at night, the little bugger was getting up to all kinds of shenanigans. Running on his little wheel, rearranging his cage and basically making loads of noise when I was trying to sleep.

Number 5. The fifth most popular pet in the UK is a guinea pig. These little animals have a strange name because they do not come from Guinea and they are not pigs. They are comical little animals that are very docile so make good pets for children.

Docile means quiet and easy to handle. They are not aggressive and seem to quite like being  picked up and stroked. I had a pet guinea pig when I was little and it was very sweet, but it didn’t really do much except eat and poo. These seemed to be it’s most skilled activities – so much that sometimes it combined them at the same time which was something that both delighted and disgusted me as a child.

Number 4 in this countdown of the most popular pets in the UK is an indoor bird. These are usually little parrots, like budgies and cockatoos. When I was a child, budgies were very common pets, but I think that they are a lot less common these days. I really like cockatoos and would love a pet cockatoo, but I don’t like the idea of keeping a bird in a cage. I mean, if I could fly and someone kept me in a cage, I would not be happy.

They are very clever animals and form strong bonds with the person that looks after them. A bond is a connection between two things. Often, we describe close relationships between people as bonds. You get family bonds and bonds of friendship. You can also use the word as a verb which means to establish or develop a strong relationship. You often hear about new mothers bonding with their newborn babies.

Number 3. The third most popular pet in the UK … can you guess what it is? It is a rabbit. Rabbits are similar to guinea pigs in that they are generally quite docile and can be quite affectionate.

Affectionate means that a person or animals show that they like someone. In people, this can be by hugging and kissing. In animals, it can be by nuzzling which is when an animal rubs its head on you. I had a pet rabbit for a while that was very social, but not affectionate. He always wanted to be with you and would sit in the same room as you, but was not very keen on being picked up and stroked.

Number 2. The second most popular pet in the UK is a cat. There are 8 million cats in the UK. That’s almost as many as the most popular pet, but far fewer households have a pet cat. This is because there are lots of people that have more than one cat. In fact, there is a stereotype in the UK. The crazy cat lady. This is a single lady who has a house full of cats. When I was a child, I knew a crazy cat lady. She looked after me and my sisters after school because my parents were at work. She had 9 cats and her house had a very strong smell of … air freshener.

I love cats – I think they are great pets. They are generally clean, they are independent and can do their own thing and don’t need constant attention. However, they can also be quite aggressive. I kind of inherited an old tomcat called Jeremy when I was a kid and he was very mean. He used to attack everyone. After a while, it made me love him more, but my friends were not very happy if he decided to sit on their laps.

And so finally, we are at number 1. The most popular pet in the UK is a dog. Dogs make great pets, but they are hard work. My puppy is now 9 weeks old and on Friday, I have to take her to the vet for her vaccinations and some other treatment. A week later, I need to start taking her for walks and training her. At the moment, she is not house trained which means she doesn’t know that it is wrong to go to the toilet in the house. I have to take her to the garden every couple of hours.

However, she is incredibly social and affectionate. She is so happy to see me in the morning and loves being stroked and having her tummy tickled. We have just taught her to play fetch and she loves running after these little squeaky tennis balls. I will share a picture of her on LearnEnglishVocabulary.co.uk.

So there you have the most popular pets in the UK and some useful vocabulary. Are pets popular in your country? Do you have a pet or are you thinking of getting a pet? Would you like one of the top 10 UK pets? Or perhaps you would like something else. I have another pet that’s not on the list. His name is Victor, the name was chosen by one of my boys. Can you guess what sort of animal Victor is?

If you have answers to any of these questions, please leave them in the comments on LearnEnglishVocabulary.co.uk.