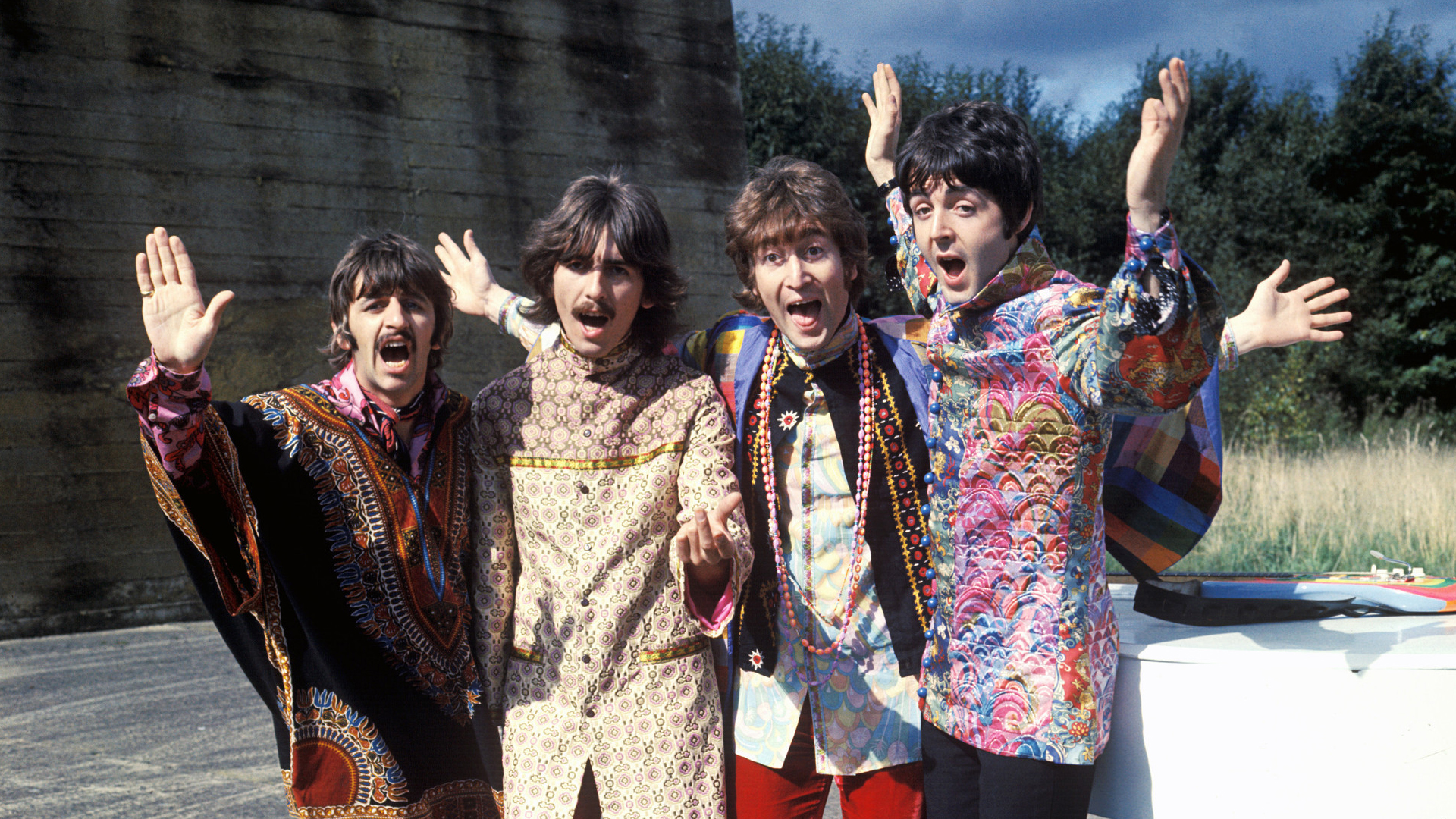 Hello and welcome to Learn English Vocabulary. My name is Jack and I’m making this podcast for you to learn or revise English vocabulary. There is a transcript of this podcast on the podcast support site LearnEnglishVocabulary.co.uk.

Today I’m going to talk about The Beatles song Penny Lane. The song was released in 1967 on The Beatles Magical Mystery Tour album, it was released well before I was born, but it’s been played in so many films and TV shows, that it’s still very well-known today.

I’m going to go through the song lyrics, that is the words to the song, and explain the more difficult or interesting vocabulary. The vocabulary today will be a mix of different levels. Some of it will be quite straightforward and some will be more advanced.

Let’s start with the title Penny Lane.  A penny is a unit of money in the UK. There are 100 pennies in a pound. A lane is small or narrow road usually in the country.  in the UK we have lanes and roads and streets, and some other words. Roads generally connect one place with another. Streets are normally the roads that go through a town with shops and town halls and things. Lanes are smaller roads, often in the country. We do use the word lane for smaller roads in towns as well. In Ludlow, where I live, the High Street in the middle of town is called King Street and then there are small lanes around the High Street, Raven Lane, Bell Lane, Camp land and Silk Mill Lane.

In The Beatles song Penny Lane is the name of a lane in Liverpool.

The first line of the song is:

In Penny Lane, there is a barber showing photographs

Of every head he’s had the pleasure to know

A barber is a man who cuts men’s hair. Women have their hair cut by a hairdresser. There are unisex hairdressers that cut men and women’s hair. However, you can still find old-fashioned barbers that only cut men’s hair.

A banker with a motorcar

Later on, the lyrics are:

On the corner is a banker with a motorcar

And little children laugh at him behind his back

To do something behind someone’s back means to do something when they aren’t there or so they can’t see it. It’s a bit like secretly, but it’s meaner than that. It’s not nice to think that people are doing or saying things behind your back.

It doesn’t say why the children are laughing at him. Perhaps he’s a bit stuck up and full of himself. In the next line it says:

And the banker never wears a mac

In the pouring rain, very strange

A mac is a waterproof coat. It’s short for Mackintosh. The coat is named after the person who invented a type of waterproof fabric made with rubber. When I was a kid, everyone had a mac. They are pretty horrible because they don’t breathe. They keep you dry, but you get all sweaty inside so you can still end up wet and cold if you have to wear one for long. Well, the banker didn’t wear one in the pouring rain. If it’s pouring rain, or just pouring, it’s raining really heavily.

In the chorus are the lines:

Penny Lane is in my ears and in my eyes

There beneath the blue suburban skies I sit

Suburban refers to the area around a city where lots of people live. These areas are sometimes called the suburbs. I think that in this song, there is a sense that the suburban parts of the city are down to earth and not pompous or self-important.

The chorus is linked to the verse with the phrase:

Meanwhile has two meanings. The most common means while we are waiting or when we are waiting for something. So if you are baking a cake and you have just put it in the oven, you could say: The cake will be ready in 30 minutes. Meanwhile, let’s clean up the kitchen. The other meaning of meanwhile is at the same time as something else. This is the use in the song. So you could say: You clean the kitchen. Meanwhile, I’ll make tea. This means the same as you clean the kitchen and at the same time, I’ll make tea. It was commonly used in TV shows in clumsy voiceovers, meanwhile, back at the police headquarters … so it fits in Penny Lane as the song is like a series of sketches.

A fireman with an hourglass

In the next sketch, we meet a fireman. The words are:

In Penny Lane there is a fireman with an hourglass

And in his pocket is a portrait of the Queen

An hourglass is an old fashioned tool to measure time. People still use egg timers that are like little hourglasses with a chamber of sand at the top which spills through a little hole into a chamber at the bottom. The fireman has a portrait of the Queen in his pocket. A portrait is simply a picture of someone, but it often just includes their head, shoulders and upper body. In the UK, we have a strange relationship with the Queen and the monarchy. Some people still believe that the Queen is very important and 50 years ago, even more people believed it. I think though, even then, if you kept a portrait of the queen in your pocket, people would think that you were a bit strange.

Poppies from a tray

In the next verse, the lyrics are:

Behind the shelter in the middle of the roundabout

The pretty nurse is selling poppies from a tray

And though she feels as if she’s in a play

The shelter is a bush shelter, a place you can wait for the bus with some protection from the rain. It sounds like it rains a lot in Liverpool. There is a bus shelter on a roundabout on Penny Lane. If you search, you can find lots of pictures of it. At that shelter, there’s a pretty nurse selling poppies. Poppies are wild flowers. They are usually red. They became an important symbol of remembrance for the people who died in the first world war. The pretty nurse in the song is selling poppies. These are paper poppies that are sold every November to collect money for war veterans. Today, they are a symbol of remembrance for soldiers and people who have died in all wars.

She feels as if she’s in a play. This means a production or show in a theatre and has nothing to do with the verb to play.

The barber shaves a customer

In the last verse, we are back with the barber and now, the banker is waiting for a trim. A trim is a simple haircut that involves making your hair shorter without changing the style.

And then the fireman rushes in

From the pouring rain, very strange

To rush means to do something quickly and with less attention. The fireman is rushing into the barbers to escape from the pouring rain.

So there you have all the important or interesting vocabulary from the Beatles song Penny Lane. I highly recommend that  you to listen to the song now to hear the language. You could even search for the lyrics and sing along. I will embed the video for the song on the page on the learnEnglishvocabulary.co.uk website for this podcast.

Image of The Beatles

Press photo of The Beatles during Magical Mystery Tour. Clothes design by Marijke Koger and Josje Leeger. By Parlophone Music Sweden This file is licensed under the Creative Commons Attribution 3.0 Unported license.

What’s your favourite Beatles song? Let me know in the comments.